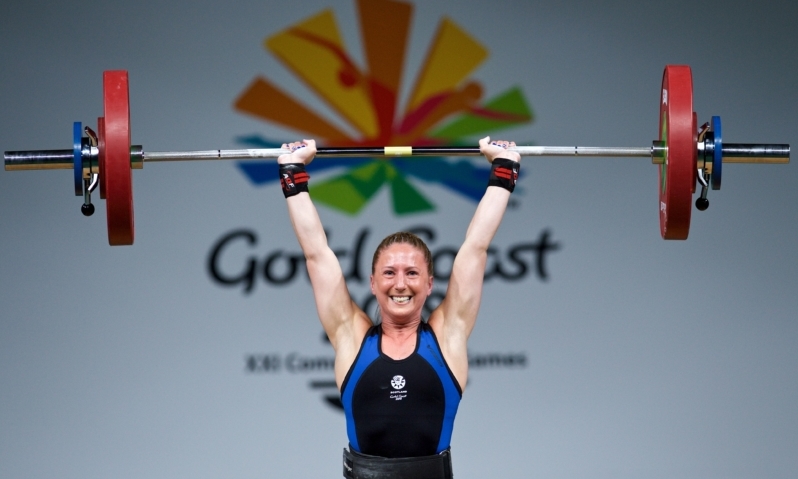 Posted at 14:20h in testimonials by Darren Nicholson
0 Likes

Gordon has asked me to tell you my story of how I went from someone who had never picked up a weight in their life to being selected for the Commonwealth Games 2018 weightlifting team. So, here goes…

I started personal training sessions with Gordon in December 2013 just after the birth of my second child, originally to help me gain the fitness and strength required to improve my gymnastics training. Gordon tailored me a programme specific to my individual needs and in a very short space of time I could feel the benefits as during gymnastics training the skills I was performing were improving and becoming easier.

In February 2014, Gordon introduced weight exercises into my programme – squat, bench press and deadlift – and pointed out that with the strength I was demonstrating, I could stand a decent chance at competing in a powerlifting competition. We decided to make that our focus going forward and Gordon spent the next 6 months teaching and coaching me and building on my strength in those 3 areas. He designed me a new programme every 4 weeks to ensure I was constantly improving and during this time gave me valuable feedback and coaching.

This achievement then opened more doors to me in the world of powerlifting and meant I was now able to compete in the European Championships. As well as continually developing my training, Gordon gave me a lot of advice on diet and nutrition to aid muscle growth whilst ensuring I maintained my weight at a steady level to keep within my desired weight category.

In September 2014, we travelled to Dublin to compete in the European Single lift competition. Although my squat on the day didn’t go according to plan, I performed well enough to win the competition and also set a new deadlift World Record. We came away from the event knowing we had improvements to make to my squat before my next competition, the World Championships 6 weeks later.

Gordon again redesigned my programme to help improve my squat and also talked me through exactly where I’d gone wrong and how we could improve it. Each training session with Gordon is always extremely well planned and structured ensuring I am constantly learning and improving.

With all the preparations in place, in November 2014 we headed to Moldova to compete in the World Championships. Again, Gordon had planned every part of the day, from the warm up to what and when I should eat and also psyched me up mentally.

After successfully completing all 3 lifts I was absolutely thrilled to be crowned World Champion and set a new World Record. Although I trained extremely hard to achieve this, without having Gordon as my coach right from the beginning none of this would have happened. It has been down to his tailored training programmes, vast knowledge of how best I could keep progressing and patient and approachable manner that I have got as far as I have as quickly as this.

After being crowned Powerlifting World Champion and gaining World Records along the way, we wanted to keep going and see how much more we could achieve together.  I’d just watched the Olympic Weightlifters in action at the Glasgow 2014 Commonwealth Games and was totally inspired. I really fancied giving it a go, with one goal in mind…to make it to the 2018 Commonwealth Games in Australia (as you’re probably realising we don’t do anything in half measures!) Gordon, being as game for a challenge as I am, agreed to my plan without hesitation. And so the hard work began.

With Gordon’s vast knowledge as a personal trainer he designed my new programme and began teaching me the technicalities of the snatch and the clean and jerk. The last 4 years have been EXTREMELY hard work but I have loved (almost) every single minute of it! I have 2 young children and numerous Domino’s Pizza franchises, so it’s been a huge juggling act trying to be a mum and business woman whilst fitting in 6 day’s of training. Also trying to learn a new sport at the age I am (36 as I write this) is certainly not the easiest thing to do in the first place, never mind when your aim is to qualify for the Commonwealth Games!

However, where there’s a will there’s a way so I wasn’t going to allow any excuses to stand in my way.
Gordon has given me invaluable advice on recovery (unfortunately this definitely slows down the older you get!) and has been there to support and motivate me every single step of the way. So far we’ve achieved becoming Scottish Champion for 3 years running, set numerous Scottish records and recently finished 3rd at the British Championships.

In September 2017 we competed in the Commonwealth Championships in Australia and we were thrilled to finish in 5th place whilst setting 3 new Scottish Records on the biggest stage we’d ever competed on up until that point. Even better, this performance meant that we were successful in achieving our goal and my ultimate dream, being selected for the 2018 Commonwealth Games so I was back in the Gold Coast in April 2018.

Representing Scotland at the Gold Coast Commonwealth Games was a dream come true, with my performance securing an 8th place finish and a new Scottish Clean & Jerk record. It’s an experience I’ll never forget and an example of how team work can make the dream work!

It’s been an amazing journey and one that has only been made possible by having the most knowledgable, motivational and supportive coach around – thanks a million Gordon! I can’t recommend Gordon and the rest of the Impact team highly enough if you are looking for a friendly, professional service that will help you to achieve your own personal fitness goals, no matter what they are.